“Hey, thanks for sticking up for me back there. That was real nice of you to do that,” Bill Otranto said to me as we were walking out of Mrs. Knoepfler’s class back in 1979.

“No problem, Bill. Those kids shouldn’t have treated you like that,” I said as I advanced to wrestling practice.

“Can I be your friend?” Bill asked me.

I looked at him with the look that said, “I didn’t know you needed permission to be someone’s friend?”

“What do I have to do to be your friend?”

I got the sense that Bill just wouldn’t take the traditional silent approach to becoming friends and needed something concrete actually to initiate our friendship, so I flippantly said, “Write “Do It Up Otrants” 1000x and give it to me by tomorrow, and then we can be friends.”

After practice that night, Bill was the first one out the door. I remember seeing him running through a field of six inches of snow to get home so he could start writing.

By the next day, I had forgotten about the whole thing.

So, as I was putting on my third pair of sweats, getting ready for wrestling practice, Bill drops this forty-page stapled document on the bench where I was sitting.

“We are friends now, right?”

“You are crazy man. I wasn’t serious when I told you to write that,” was my reaction.

“Bill, I considered you a friend way before you wrote ‘Do It Up Otrants 1000x’”

And that is how my friendship with Billy Otranto began some thirty-five years ago.

Not only were Bill and I friend’s we were teammates.

Not only were we teammates, but we were also workout partners.

Not only were we workout partners, but we were also part of something that was bigger than both of us.

Something that both he and I were proud to be part of.

Bill and I were part of the resurrection of the William Floyd Wrestling Program back in the late 1970′s, early 1980′s.

At the start of my wrestling career, in the 6th grade, I remember attending William Floyd’s high school wrestling matches.

I remember being amazed.

Not in a good way.

I remember William Floyd being shut out match after match.

Not only were they shut out, but also in one match I remember watching, not one William Floyd Wrestler scored a point.

A few things happened over the next few years.

Dan Nolan, who I consider a dynamic coach, took over the program and he taught us how to believe.

He taught us how to think,

“We deserve to win just as much as anyone else.”

Not only were we winning, but we also got a couple of big wins, and we started to be recognized.

Pride was a new emotion for all of us.

I remember Coach Nolan getting us green and yellow mesh shirts to celebrate our Championship.

To be part of the ride from total obscurity to winning the Suffolk County Team Championship, no matter what class, was one of the most rewarding feelings I ever had as an athlete.

To this day, I have a special bond with every teammate who shared that experience through those building years.

But none as close as the one I have with Bill.

We may not see each other as much as we should, but we would be there for one another on a second’s notice.

And we have been.

A few years ago, while I was attending his house warming party, Bill took me downstairs to show me his basement which was a cross between a wrestling room and a gym.

As he was showing me around, my eyes become fixated on a case hanging on the wall.

Inside the case was a yellow and green shirt.

Not just any shirt.

The shirt we received to celebrate our 1982 Class C Wrestling Championship.

That was in 2010, 28 years after we accomplished a feat that we were proud of.

“I can’t believe you still have that shirt,” I remember saying to Bill in astonishment.

He knew I was serious.

He said he would never give up that shirt for any amount of money; it just meant too much to him.

I quickly joked that he better install an alarm system in his house, because I was coming to get it when he wasn’t home.

That shirt meant so much to him.

In 2010, Maverick was just becoming good, but far from State Champ material, so Bill felt safe saying to me, “I will give you this shirt when Maverick wins the States.”

Years later, as I sorted through the mail, mostly of items I did not want to open, there was one package that caught my eye. 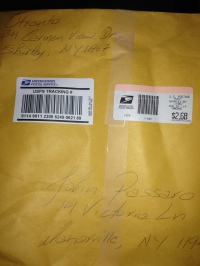 It was addressed to me, from Bill Otranto.

I quickly opened the package.

It was the shirt. 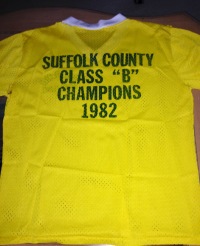 32 years old, as fragile as can be, with rips at almost every seam.

I picked it up.

There was a note attached.

“How’s this for an act of kindness.

Your boys have done great.

With the P.S. taking a jab about the difference in my weight since 1983.

I couldn’t have received a more meaningful gift, from anyone, in my life.

You see, wrestling is all about sacrifice.

It’s about giving up something you truly value, to hopefully get something that you value even more in return.

Bill gave up one of his most prized possessions in return for my happiness, friendship and something that he valued more.

It seems, in the end, that I was the lucky one the day Bill and I became friends.

And 30 other inspirational wrestling stories can be found in:

Capturing the People and Culture of the Greatest Sport on Earth.

All of JohnA Passaro’s published works are available at these fine online stores: