Get One For Your Room 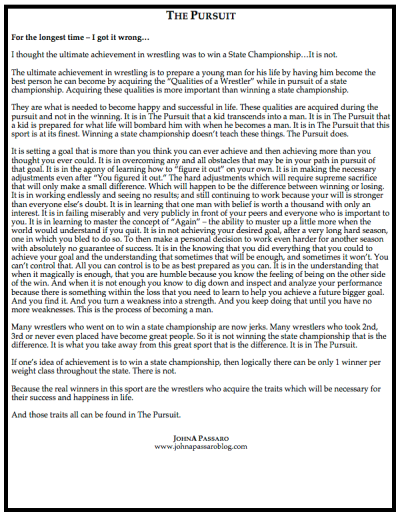 Please note that the color border is for website contrast and is not part of the poster.

For the longest time – I got it wrong…

The ultimate achievement in wrestling is to prepare a young man for his life by having him become the best person he can be by acquiring the “Qualities of a Wrestler” while in pursuit of a state championship.

Acquiring these qualities is more important than winning a state championship.

They are what is needed to become happy and successful in life.

These qualities are acquired during the pursuit, and not in the winning.

It is in the pursuit that a kid transcends into a man.

It is in the pursuit that a kid is prepared for what life will bombard him with when he becomes a man.

It is in the pursuit that this sport is at its finest.

It is in overcoming any and all obstacles that may be in your path in pursuit of that goal.

It is in the agony of learning how to “figure it out” on your own.

It is in making the necessary adjustments even after you “figured it out.”

The hard adjustments which will require supreme sacrifice that will only make a small difference. Which will happen to be the difference between winning or losing.

It is in working endlessly and seeing no results; and still continuing to work because your will is stronger than everyone else’s doubt.

It is in learning that one man with belief is worth a thousand with only an interest.

It is in failing miserably and very publicly in front of your peers and everyone who is important to you. It is in learning to master the concept of “Again” – the ability to muster up a little more when the world would understand if you quit.

It is in not achieving your desired goal after a very long hard season, one in which you bled to do so, and then making a personal decision to work even harder for another season with absolutely no guarantee of success.

You can’t control that.

All you can control is to be as well prepared as you can.

It is in the understanding that when it magically is enough, you are humble because you know the feeling of being on the other side of the win.

And when it is not enough, you know to dig down and inspect and analyze your performance because there is something within the loss that you need to learn to help you achieve a greater goal in the future.

And you find it.

And you turn a weakness into a strength.

And you keep doing that until you have no more weaknesses.

This is the process of becoming a man.

Many wrestlers who went on to win a state championship are now jerks.

Many wrestlers who took 2nd, 3rd or never even placed have become great people.

So it is not winning the state championship that is the difference.

It is what you take away from this great sport that is the difference.

It is in the pursuit.

If one’s idea of achievement is to win a state championship then logically there can be only 1 winner per weight class throughout the state.

Because the real winners in this sport are the wrestlers who acquire the traits which will be necessary for their success and happiness in life.

And those traits all can be found in the pursuit.

All prices are plus shipping.